There are two views in the Pipeline you can choose the Forecast view or the Kanban view.

1
In the forecast view → click Edit button beside Target.

2
In the Edit sales target  pop-up, enter individual monthly targets for you or your team member in the boxes provided → click Save.
Note: Select the pencil icon to edit the default sales targets. 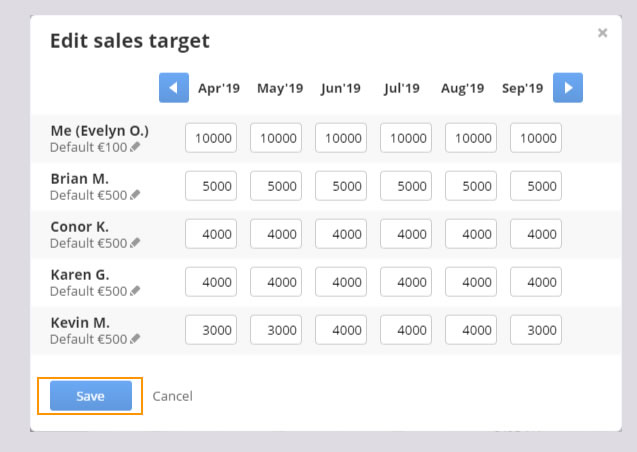 Move a deal from one stage to another

1
Select a deal from the pipeline → in the pop-up box, select the  STAGE dropdown.

2
Choose the deal stage you wish to move the deal to from the dropdown.

3
The deal will be automatically displayed under the new deal stage.

There are two options to display total amounts in the pipeline.

1
Click on the downward arrow to change the display.

1
To filter by deal type → see the Deal list under the pipeline → click the Show drop-down.
2
Choose to view from the following:

3
Click on the gear ic on to customize the Deal list. Select or deselect the fields to add a column.
Note: You can add up to 9 columns to the Deal list. The columns  Deal name,  Contact,  Stage and  Amount are mandatory columns in the Deal list. You then have the option to select from the following columns:

4
Drag the fields to reorder them →  Apply.

5
Once you've applied the columns on your Deal list, you'll see them in the Deal details in the Forecast view.

Note: You can open your contact in a popup while viewing a deal to add next actions, notes, deals and calls.